Today we have a new acquisition into the photography collection here at TLPS.  This is a photograph of Josephine Cunningham Whittell (far right) with two other actresses from the musical “The Only Girl.”  The Broadway musical ran from November 1914 to June 1915.  I found this piece on Ebay and even though it is from after her marriage to George Whittell Jr., I wanted this photograph for our collection for a few reasons.  Those being that most of the photographs we have of Josephine are from her Hollywood years at a much later date; this would be more of what she looked like when she was with George. Also, her story is a large part in George’s earlier, pre-Thunderbird life, a story that is one of a very different man than he became in his later years.  I feel her place is important in the Whittell history if we are to understand George better. 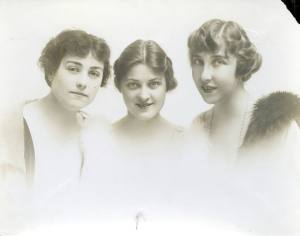 From back of photo: “Miss Louise Kelley, Miss Vivian Wessell and Miss Josephine Whittell in ‘The Only Girl’ at the Lyric Theater.” TLPS Archives.